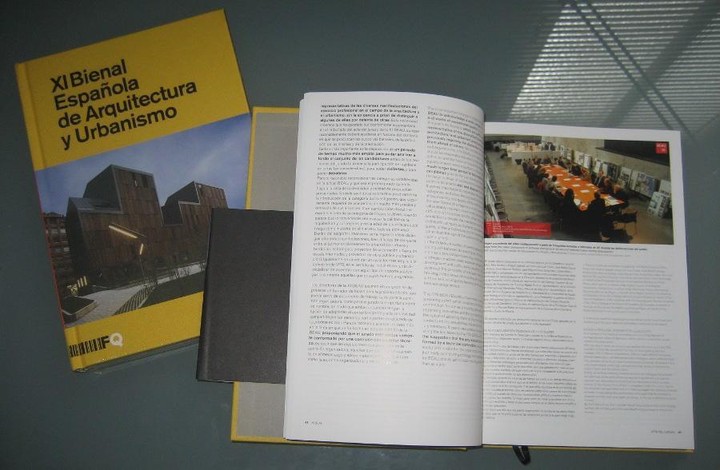 Since its inception, BEAU has been a snapshot of Spanish architecture and urbanism generated in the course of the previous two years, viewed through the lens of an independent jury with alternating members who bring with them their particular vision of the moment. What is perhaps not so obvious is that it is also a reflection of its own time. The observer is also the observed object.

In recent years we have seen how the Internet and ICT has entered the day to day existence of most people in developed countries. Even websites that have been part of our daily lives for a relatively long time have had to evolve to survive: it is no longer enough to have something to say; is not enough to be a mere shop window. There is such an excess of information on the Internet that we have to provide something more if we do not want thecdocumentary noise to drown out our message. No wonder, then, that Web 2.0, a web that allows user participation, has evolved, giving rise to many social networks (so fashionable lately), blogs, etc., and a change in the way we communicate with our friends, acquaintances and professional contacts. New interaction channels like Twitter have changed not only where we tell something but also what, how and when we tell it. Recent social events in the world have shown that although this is just the beginning, social networking can and will continue to play an exponentially significant role in many fields that they were not even designed for, proving their astonishing capability for adaptation and evolution.

Some say that the current crisis is a crisis of values, more than an economic crisis. We have lost faith in banks, businesses … which is why we are beginning to call them to account. It is increasingly common for us to ask where a product comes from, by whom and how it was manufactured, what is done with its waste, before we decide to buy… and we want to know who is funded by our money when we open a bank account or buy certain products or services. No wonder, then, that the companies which inform us about this information in a clear, transparent way are beginning to stand out from those that do not, and are starting to be more successful.

All of this may have helped to promote current concepts like coworking, crowdfunding, crowdthinking, citizen participation … i.e., different models of participation and collaboration based on perfectly familiar concepts like teamwork, knowledge society and collective intelligence to achieve optimal results that overcome individual limitations.

In this context, it is not surprising that this year’s BEAU has drawn on all these parameters and conditions. Actually, it could not have been otherwise. The documentation, dissemination and transparency team, formed by Ethel Baraona, Pablo García Bachiller and myself, has collated some of these parameters and included them in this Biennial, establishing for the purpose common goals and a teamwork and consensus-based methodology that gives us a degree of freedom of movement while at the same time allowing each of us to develop themes which, due to affinity or knowledge, we can best handle to achieve the best possible results. All of this is part of an integrated, unitary project focused on defining the known ingredients in a new, unitary and coherent way, and generating an optimal response to the Directors’ commission. At the end of the day, that is essentially our job as architects. The following pages explain the three major pillars of the project. To make it easier to understand our work, each text focuses on a specific issue and is signed by the person who was responsible for its development, although the real process was slightly different, as these three types of action never remain in their pure state and are continuously intermingled, along with the work done by each one of us.