'Accessible Zaragoza' at Pint of Science 2018 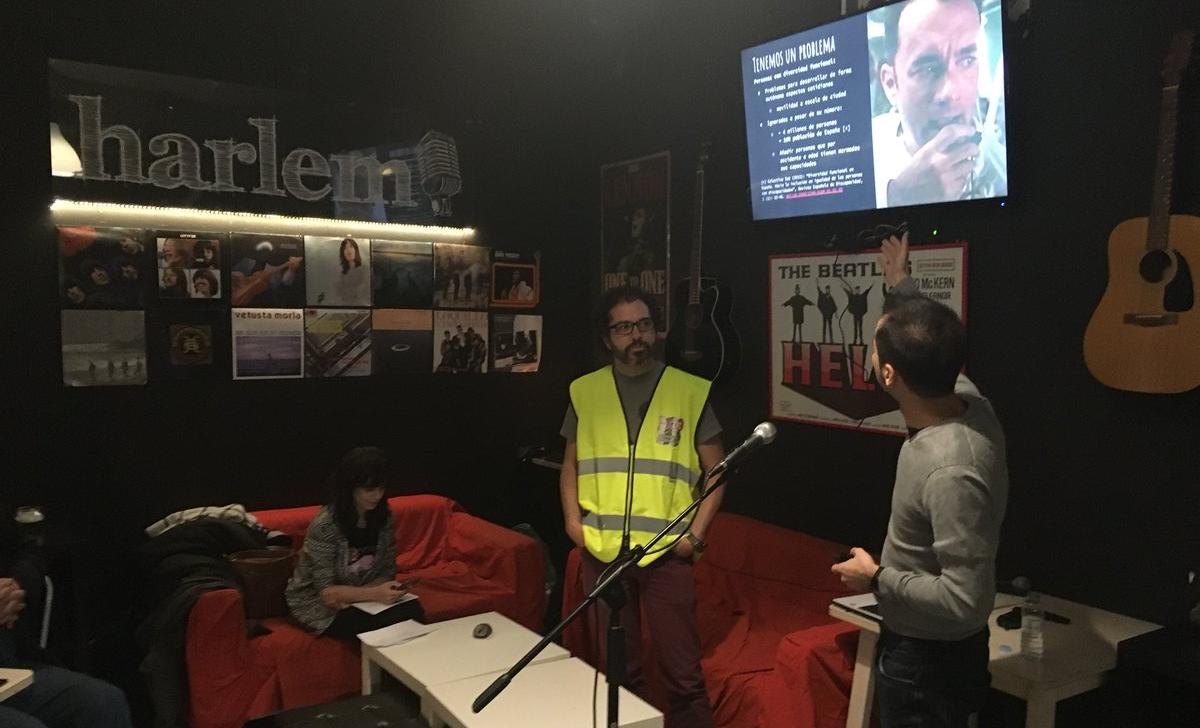 Houston, we’ve got a problem! …when there are no maps paying attention to people with functional diversity.

Let me propose an exercise: close your eyes for a moment and imagine a person devoted to science and research. Almost certainly, you may have visualized a middle-aged man in a white robe and glasses who is doing “things” in a laboratory or in front of a computer, probably to solve a problem related to health, the environment or making a process more efficient. If I have “read your mind” it is not because you are a predictable person, but because that is (with small variations) the most frequent image about scientists. Unfortunately, this view reflects some prejudices (such as gender1 and thinking that sciences are always applied sciences2 and limited to what is usually known as “natural sciences”3) and also evidence that the tasks that a scientific person does are incomprehensible to most people and, therefore, are a complete mystery.

It is precisely to bridge this disconnect between society and science that the initiative Pint of Science was born in 2012. Ever since, it has spread from the United Kingdom to 21 countries on all continents (except Antarctica). The idea behind Pint of Science is as simple as it is effective: to convert pubs into meeting points between science and society. To this end, for three days in a row, a festival is organised in several pubs from different cities and countries in which scientists explain their work to the audience for about 15 minutes, followed by a debate watered by the omnipresent beers that populate the majority of pubs worldwide (hence its name). There is also the funny case that some of the people attending the festival are totally unaware of the existence of the festival.

Why am I telling you all this? Well, because this year I participated as a speaker in the Zaragoza edition together with my colleague and friend Miguel Sevilla-Callejo to tell about the project of which I have already written about, Accesible Zaragoza, with the talk we titled “About chairs, chairs, kerbs and traffic lights. #zaccessibility for improving the mobility of people with functional diversity” that you can see in this link (in Spanish).

Our talk was one of the three of the session titled “On retrones and satellites” that took place on Monday, May 14 at the Harlem Rock Café and in which also participated Rafael Martínez Cebolla, from the Colegio de Geógrafos de Aragón, and Raúl Gay Navarro, member of Aragonese parliament.

Rafa talked about the work that geographers do and the importance of geography to understand and explain phenomena of all kinds and that have to do with how we perceive and relate to the world and its physical environment, using an endless number of curious maps.

In his entertaining talk entitled “Nobody’s perfect: I have no arms”, Raúl recounted his personal experience in order to raise awareness of how the daily life of a person with a disability can be but, above all, in order to break taboos about disability. All of that with a great mixture of humour, rawness and tenderness.

Finally, Miguel and I explained the need for a map like the one we are developing on urban accessibility and the opportunity to do it collaboratively using OpenStreetMap not only to denounce, but to co-responsibility of citizenship and contribute to improving the autonomy of people with functional diversity.

The experience was unbeatable, both for the interesting and complementary previous talks, and for the organization of the event through the association that organizes Pint of science (thanks in particular to Carlos, Juan and Silvia for their work), but especially for the reception of the public, which lent itself to an interesting debate that lasted until the closing time of the bar.